With two pregnant goats my last few weeks have been focused on the barn expansion project – I need a birthing/nursery space for the itty bitty babies! Any leftover time been devoted to fieldwork and chicken keeping, so keeping this space up to date has been sorely neglected. Padme’s babies arrive any day now (my estimate is July 10 – squee!) and I’ll have all sorts of exciting stories to tell, I’m sure.

First up was extending the run to enclose the far side of the barn. This meant setting more posts – I discovered Quikrete comes in post-setting size bags so it was a faster job that before. I used salvaged chicken wire and fencing to wrap the boards, fastening with cable ties. I’ve set so much fence over the last few months that this seemed to come together quickly. We purchased a second water tank and I set up a gate to keep the other goats out.

I quickly found the gate was a terrible idea – the other goats clambered all over it, bending the latch and busting one of the hinges. Padme even broke a hole in the hogwire fencing so she could rejoin her friends! We want the option to separate two groups of goats, in case we opt to keep any birthed boys, so I came up with another solution to keep mamas and babies secure.

Pallets are a wonderful material for fence building. They are sturdy and strong, easy to secure to one another, and if the boards are set close you don’t need to add wire to keep goats secure (poultry would require wire).

I set two small pallets on end, securing them to one another with cable ties. I installed a 1×4 along the top for added strength. I also added a 10′ x 5′ cattle panel atop the pallets – goats are wily creatures and Padme is more than typical. Her pregnant body is incredibly wide but she still manages to squeeze through small spaces.

That said…she managed to squeeze out of this ‘secure’ area and rejoined the other three goats yesterday! The upside is she is finding the weak spots before her babies arrive so I can get them patched.

I believe she worked her way out between a post and the metal exterior sheathing. I blocked the hole with some scrap wood, and also added a couple boards to one of the pallets for extra strength. 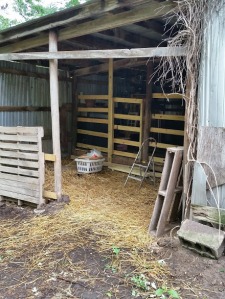 Here’s a shot of the interior of the barn for the expecting mamas. Unlike the other side the entire wall was open, so I used a couple small pallets to create an exterior wall. I recently added a 6′ piece of cattle panel to the top of pallet for added security.

The interior wall was in rough shape, so I pulled off the old boards and rebuilt the wall. I needed a gate so goats can be easily moved from one side to the other; this also simplifies feeding, watering, and cleaning the space. I set the horizontal boards fairly close together – I want to see the animals but minimize escape possibilities. Padme can’t fit through, and it’s high enough that I’m not overly concerned about the babies (that will likely change when they arrive though!)

I needed a post so I could hinge the gate, so I fastened a 2’x4′ to the top stud. I’d already put a pallet on the floor to block the opening under the barn floor, and the slat was just wide enough that the 2’x4 fit between the space. Secured!

Finally, I needed a gate to allow entry/exit up the walk to the chicken coops. I installed some posts so I can add a covered walkway – handy in inclement weather. I love the view of the new chicken garden, and I like to think the animals will enjoy talking to one another.

The summer heat meant this project took a lot longer than I wanted – it’s the shaded side of the barn but I still needed to work early morning and evening to minimize chances of heat stroke. Babies will be here soon!