My roommate and I talked for months about whether or not to add a farm dog to our herd. We lost a baby goat to a stray dog in March, lost a chicken to two stray dogs in May, and lost 3 guineas to foxes earlier this summer. I take the responsibility of animal ownership seriously, and the last thing I wanted was to add another wandering, destructive dog to our neighborhood. Then Willow showed up in our driveway!

It was a Saturday morning about a month ago. I headed out to open the poultry coops and milk the goats, when a thin black and white dog ran up to me, laid down and flashed her belly at me. I fell instantly in love with her – she had a face like my beloved Sumatra! She was wearing a collar but had no tags. After finishing morning chores I headed up to our local vet to have her checked for microchip (none), get her vaccinated, and see if she’d had her spay/neuter surgery. She was covered with fleas and visibly thin – four ribs were visible and she was about 8 pounds under weight. I believe she suffered some sort of abuse before she was dumped on our street. She drops to her back/flashes belly at the slightest hint of a rough voice, and puts her ears back and cowers quickly if she feels at all unsure. The vet decided she’s most likely a smooth coated border collie.

Willow is named for Buffy (the Vampire Slayer) Summer’s best friend. She’s thin, lithe, quick, with a streak of puppy silliness (she’s definitely less than a year old) just like that character!

My aunt does great work with several dog rescue organizations and has been a great resource for my new addition. She told us about Spay & Neuter Kansas City that offers low cost surgeries, and we were able to get that taken care of before she and my roommate left for a vacation. I was really impressed with their service and highly recommend them. Willow was thrilled to leave the clinic, but showed her angst by sitting in the backseat with her back to me much of the ride home!

Willow is quite a different puppy than my Sumatra was – crazy intelligent and high energy. My two girls are still getting a feel for each other and we had one pretty intense spat while my roommate was away. I made the rookie mistake – after a long day – of prepping dinner for the dogs with the new girl still in the room. Willow got hold of Sumatra’s ear and bit straight through – my sweet pup had a 1/2″ gash that was incredibly deep. Once my roommate was back I ran Sumatra to the clinic where she got two staples and a week’s worth of antibiotic. She was not a fan of the protective cone, and my aunt came through once again with a little doughnut style ring – very much like the neck pillow’s folks use for travel. Sumatra liked it much better and even fell asleep on it several times. She stopped scratching after two days and no longer had to wear the pillow. Staples came out this week and she’s doing just fine. 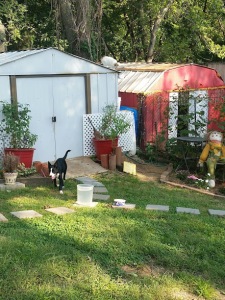 Everyone’s doing well and we’re slowly acclimating Willow into our pup pack. She’s quite content hanging out in the sunroom – she’s sleeping in a kennel – and loves running fence lines and helping me in the field. She’s exactly the sort of dog I dreamed of having for a working farm dog – isn’t it amazing that God knows so well what we desire and provides at exactly the right time?