Adding ducks to my flock was a last minute idea, so I researched fast and furious earlier this year. While the info I found was good, the practical realities proved challenging and I ended up converting a second shed into a coop specifically for my ducks.

My chickens, ducklings, and guineas had plenty of space in their coop/run – the challenge was the ducklings need (and love) of water. The soil in the original run was incredibly matted and soggy – so the chickens and guineas were unable to dustbathe or scratch. I first tried spreading straw on the soil, but that magnified the problem, leaving a squishy, smelly, composting mess just outside our back gate! 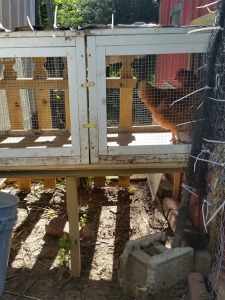 Converting the second shed was much easier than the first. It wasn’t as badly damaged, just needed to replace a few floorboards and fill holes before working on the pond and run. I cut holes for the windows and covered them with hardware cloth. The two sheds are connected by a tunnel system I constructed from scrap 2x4s, plywood, and the extension boxes from my original chicken coop. The future plan is to open both sides so the birds can move back and forth, but for now I’m keeping them separated so the ducklings can get used to their new home. 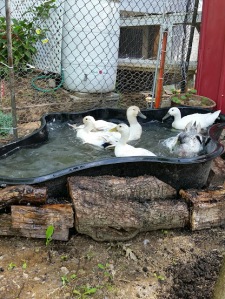 We purchased a pond insert and I dug deep so it could settle into the earth. I surrounded it with stones, logs, and soil to keep it in place – this also helps the birds get in/out and should attract insects and frogs to the water source. I used scrap wood to build a long ramp up – these babies waddle more than walk after all, and don’t flutter around like the chickens and guineas. The ducklings walked through the tunnel no-problem to get to their new space, and getting them to try out the pond was a breeze. I tossed a few mealworms into the water as teasers, then watched in amazement as they found the ramp and waddled right up and in. It is so fun to watch them swim around, duck under the water, and splash to their heart’s content.

Back to that soil issue: We had a large bag of peat moss left from the blueberry project, which gave me an incredible idea. Peat moss is highly absorbent, and I thought I could fix the soil once I got the ducklings out. Sure enough, it worked. Three wheelbarrows full of mucky straw were carted to the compost heap, I forked the soil to break up the matted grass/soil/straw and expose fresh dirt and worms, then covered the lot with the half the bag of peat moss and gave it time to absorb the excess moisture. I added the rest of the bag the next day and the soil problem has been corrected.

The duck coop interior space is slightly smaller than the other shed, but there are fewer birds so its no big deal. The chickens are happily scratching and dustbathing, the ducklings are wildly happy in their pond, and the guineas are roaming freely around the pond. Quite a lot of growth in just four months for our flock!